Leases and Request for Information, Concessionary Leases and Other Arrangements Similar to Leases

The International Public Sector Accounting Standards Board (IPSASB) has recently issued for comment Exposure Draft 75, Leases (ED 75) together with Request for Information, Concessionary Leases and Other Arrangements Similar to Leases (the RFI). These two documents form the next two phases of the IPSASB’s leases project.

In January 2018, the IPSASB sought comments on Exposure Draft 64 Leases (ED 64) which proposed new requirements for lease accounting based on IFRS 16, Leases issued by the IASB.

As a result, the IPSASB decided to proceed with their leases project in two phases: 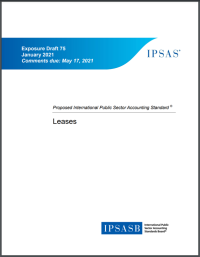 ED 75 is based on IFRS 16, Leases issued by the IASB and addresses accounting for leases which are fully within the scope of that standard.

ED 75 proposes a right-of-use model for lessees under which they are required to recognise:

ED 75 proposes that both the right-of-use asset and lease liability be measured at cost (which is determined by the present value of the future lease payments).

ED 75 does not propose significant changes for lessors, instead proposing to substantially carry forward the lessor accounting currently required in IPSAS 13 Leases (which is also consistent with IFRS 16).

The XRB’s Policy Approach to Developing PBE Standards establishes a rebuttable presumption that the NZASB will adopt a new or amended IPSAS, therefore your feedback to help us influence the development of the international standard is important.  Prior to issuing a New Zealand standard based on the final IPSAS pronouncement we consult with you again.

In the public sector, leases are often entered into by an entity at below-market terms. These leases are referred to as concessionary leases. It is also common for entities to enter into other arrangements similar to leases where rights to access or use assets are transferred, but which do not meet the definition of a lease under IFRS 16.

The RFI has been issued to gather constituent input on the characteristics of concessionary leases and other arrangements similar to leases entered into by public sector entities and how they are currently being accounted for. Feedback received on the RFI will assist the IPSASB in determining whether additional standards-level or other guidance is needed for these types of arrangements.

The New Zealand Accounting Standards Board (NZASB) encourages you to read ED 75 and the RFI and to comment on the proposals.

Commenting on the Proposals

This is your opportunity to comment on this ED.

We also encourage you to send comments directly to the IPSASB, with a copy to the NZASB. Your comments can be made electronically on the IPSASB website by clicking on the following link https://www.ipsasb.org/consultations-projects/open-public-consultations. First-time users must register to submit electronically.

Please use this secure online form.

It has been designed to make your upload safe, quick and easy.

You can upload up to TWO documents.

Looking for something else?

Here are some popular pages people are also looking at: